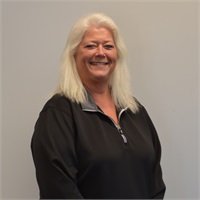 Rhonda began working with Kurt Kechely in 1993 during his time at Daubert & Butler Associates. Rhonda began her career as an office assistant to all of the partners in the office. Kurt knew how valuable Rhonda’s work ethic is and slowly, but surely, Rhonda stopped working for the other advisors one by one until she was solely Kurt’s assistant. In 2007, Kurt and Rhonda moved to their own building and continued to grow Kechely Wealth Management. Rhonda has been working as Vice President and a Registered Sales Assistant and in 2018, Kurt made Rhonda a part owner in the company. Among her many duties, Rhonda serves as office manager, client relations representative, and handles all the bookkeeping. (If you happen to see Rhonda trying to escape through the front door, please return her!) But in all seriousness, Rhonda is a big part of what keeps this office running.

Rhonda grew up on a farm outside of Eagle. As a teenager, her family moved to the Norris School District where she graduated from high school in 1989. She furthered her education at Southeast Community College where she studied Psychology. After she began working with Kurt, Rhonda became licensed in Life & Health Insurance in 1995 and then later, in 2000, got her Series 6 and Series 63 licenses. At the beginning of 2019, Rhonda acquired her Series 7 license as well.

Rhonda enjoys spending time with her family and friends, seeking new adventures and being outdoors. She has two children at home, Tawny and Marshall, who keep her active outside of work. Tawny is a college student at Southeast Community College and loves all things art. Marshall is in high school and keeps Rhonda busy attending his football games, band concerts, and marching band competitions. Lately, Rhonda has been enjoying traveling and trying new things like kayaking, trap shooting, and kickboxing. Anywhere there is sunshine and water, Rhonda has found her happy place.